Today, Securing America’s Future Energy (SAFE) published its latest National Strategy on Energy Security—a policy roadmap on how to improve American energy security by increasing domestic oil supply, while also enabling the long-term abatement of oil dependence. While SAFE has long advocated for domestic energy production as well as policies to expedite the adoption of alternative fuel vehicles, new technologies are making a different kind of transportation future available. In SAFE’s view, not only will the car of the future not run on oil, it will likely be shared, autonomous, incredibly safe, highly efficient, and better in almost every way than our current transportation system—a vision that the private sector is striving to achieve, but will only be possible with the cooperation of policymakers.

Autonomous vehicles are a fairly nascent concept in the public’s eye, but according to the report, now is the time to not only expedite their adoption, but also to create a regulatory framework in which they can quickly achieve scale, and the report lays out specific recommendations for the federal government. The reason to expedite adoption is simple: Autonomous vehicles will not only save countless lives, benefit underserved populations such as the elderly and disabled, reverse countless inefficiencies in the transportation system, and enable productivity during hours currently spent driving—they will also slash oil consumption. According to SAFE’s research, autonomous vehicles will transform energy consumption pattern in two phases. In the first phase, the transition to driverless cars will have both positive and negative impacts towards vehicle energy consumption—total vehicle miles travelled will likely increase, driving an uptick in fuel consumption in the process. But early-phase autonomous technology can also reduce fuel consumption through things like improved traffic flow and reduced congestion, smoother braking/acceleration, and reduction in drag through platooning. 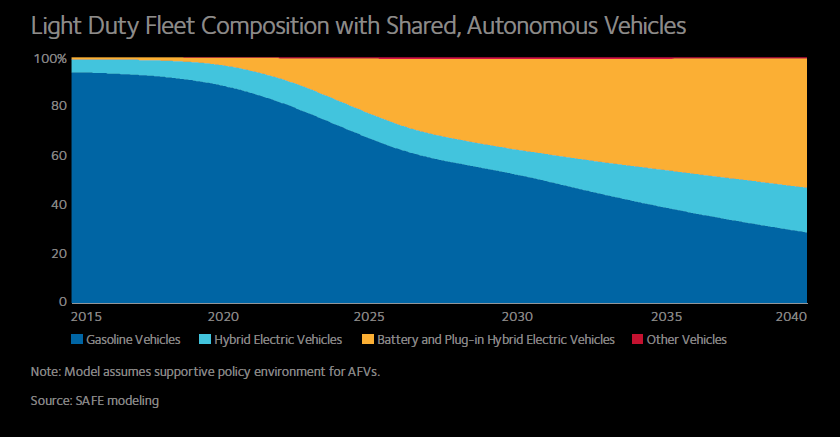 In the second phase, dramatic reductions in fuel consumption will be achieved. As accidents become far less common, vehicle lightweighting will improve fuel efficiency. These gains will be compounded as humans step back from the driving experience, and the technology and transportation system at large optimizes to reduce fuel demand.

SAFE sees two other major ways that autonomous vehicles will reduce fuel consumption in the long-term. The first is a “right-sizing” of the vehicle fleet. “As 90 percent of personal trips have one or two passengers, most travel demand will be filled by small, light vehicles which consume less fuel. In addition to being intrinsically more efficient, a light car can go farther on a battery or other advanced fuel, making electric vehicles an increasingly attractive choice,” says the report.

“Shared vehicles will have higher rates of utilization, which flip the economics of ownership to favor electric or other advanced fuel vehicles which typically have lower operating costs.”

According to SAFE’s modeling, the transition towards shared mobility will cause the vehicle fleet to convert towards alternative fuels. “Shared vehicles will have higher rates of utilization, which flip the economics of ownership to favor electric or other advanced fuel vehicles which typically have lower operating costs. If an electric vehicle (or other AFV) costs an additional $5,000 in up-front costs, but has operating costs that are lower by 10 cents per mile (a conservative estimate), the EV becomes economically advantageous at about 50,000 miles. SAFE modeling showed that a shared, autonomous vehicle can reach this mileage in several months, making EVs a rational investment for fleet managers.”

A comprehensive suite of recommendations

SAFE’s report calls for bold action from the federal government to streamline regulation and avoid a messy patchwork of state-by-state rules, and recommends establishing deployment communities for the deployment of autonomous vehicles that will facilitate “learning by doing.” SAFE’s recommendation argues that, since the vehicle itself becomes the driver, regulation autonomous vehicle certifications is essentially a matter of creating a safety code for vehicles. The federal government should, therefore, be able to pre-empt state level regulations of autonomous vehicle technology.

Regarding state-by-state regulations, the report cautions that the variation in state standards that is currently emerging is a serious concern for industry, as it would require manufacturers to sell different vehicle models at the state level. A similar concern caused the Supreme Court to uphold federal pre-emption of state-level safety standards in the Geier and Williamson cases. SAFE’s recommendation argues that, since the vehicle itself becomes the driver, regulation autonomous vehicle certifications is essentially a matter of creating a safety code for vehicles. The federal government should, therefore, be able to pre-empt state level regulations of autonomous vehicle technology. If it is determined that existing law does not give the National Highway Traffic Safety Administration (NHTSA) sufficient authority to pre-empt state laws obstructing the deployment of autonomous vehicles, Congress should grant such authority.

In addition to streamlining the deployment of autonomous vehicle technology, the report also includes recommendations to maximize the benefits of the technology. These include creating new incentives for ridesharing and efficiency, and enabling access for the disabled and other underserved groups.

In terms of fuel efficiency, current fuel economy and zero emission vehicle mandates have proven themselves to be powerful policy levers in incentivizing automakers to design and sell vehicles that reduce oil demand—but they have not been designed to incentivize efficiency in autonomous drive, nor do they account for important changes in driver behavior and vehicle usage that will result from the widespread adoption of autonomous vehicles.

Therefore, testing and enforcement of fuel economy standards should not only measure early autonomous technology, but also be designed to incentivize efficiency.

Under current law, vehicle efficiency ratings are determined by tests run on a dynamometer, which is essentially a treadmill for cars, during a “city” and “highway” cycle. Variations in driver behavior can cause significant swings in real-world fuel economy, and the same is true even for semi-autonomous technologie—algorithms for automatic braking or cruise control can increase or decrease fuel usage by as much as 10 percent, according to recent research. Therefore, testing and enforcement of fuel economy standards should not only measure early autonomous technology, but also be designed to incentivize efficiency. The additional benefits of autonomy, such as reduced congestion and accident frequency, should be incorporated through “off-cycle” technology credits, once the benefits can be quantified. Additionally, changes in how vehicles are used and deployed should be accounted for—shared vehicles which will drive ten times as many miles per year as a privately owned vehicle, and fuel efficiency standards should recognize the increased impact of these high-utilization cars.

Finally, the report recommends that regulatory structures should be updated, including creating more flexible performance-based safety standards, and a new department should be created at the Department of Transportation to lead federal action on autonomous vehicle policy. Dovetailing with the report’s goal to maximize the benefits of autonomous vehicles, there are also numerous recommendations on how to continue moving the transportation system away from oil by increasing fuel diversity.

SAFE recommends reforming current tax incentives for purchases of alternative fuel vehicles, which are presently limited to the first 200,000 vehicles sold by an automaker. Instead, the report suggests that this volume limit is removed, since it does not encourage manufacturers to move quickly and expedite sales of alternative fuel vehicles. Instead, the report recommends that the tax credit will begin to be phased out by 2021, and expire completely in 2023, but that it should only apply to vehicles with retail prices below $40,000.

The report also sees a need for increased research and development funding for automotive batteries and natural gas storage tanks, to advance the deployment of electric and natural gas vehicles. Additionally, it sees a demonstrated need for non-monetary incentives for alternative fuel vehicles, such as access to high-occupancy vehicle lanes, installation of workplace charging, and free parking. The effectiveness of these policies will be augmented by federal programs such as targeted advanced-vehicle deployment communities, and leveraging the federal government’s purchasing power to increase government adoption of non-petroleum cars and trucks. Additionally, the Environmental Protection Agency and National Highway Traffic Safety Administration should begin work on a plan for regulating vehicle efficiency post-2025, when the current suite of fuel economy regulations ends. This work should consider a revenue-neutral gasoline tax, and study the transportation system as a whole, rather than focus only on vehicles.