Earlier this week, the Environmental Protection Agency (EPA) released its final determination in its mid-term review of greenhouse gas emissions (GHG) standards that will govern all new passenger vehicles sold in the United States from 2022 through 2025. As expected, the agency decided that the standards are too stringent, and it now plans to ease them.

A lot has been written about EPA’s move. But in reading through the determination, something new caught my eye that I suspect many people glossed over. As mundane as it may seem, the section explains a lot about why auto companies wanted to revisit the standards, what is really at stake, and why we may be about to miss out on improving one of the most innovative aspects of the current policy: the credit market.

Credits traded between manufacturers are an especially efficient outcome because it means marginal emissions reductions are coming at the lowest cost.

“The agency’s January 2017 Determination was completed at a time when the trends and data…showed that the majority of the major car-manufacturing companies were “over-complying” with their relative GHG compliance requirements and building up credits. EPA’s latest data show that starting in MY 2016, many companies, for the first time, had to rely on credits in order to comply with the program. While these companies did remain in compliance, they are relying on banked credits which suggests that it may be increasingly difficult for them to comply going forward as they use up their supply of credits. Additionally, the stringency curve dramatically increases at around the same time these credits could run out, further complicating the feasibility of compliance for MY 2022–2025.”

This is true. At the time the previous determination was made, the available data suggested that the industry as a whole was producing vehicles whose performance exceeded the standards. As a result, companies were generating “credits,” denominated in tonnes of greenhouse gas emissions, which they could bank to cover future shortfalls. Moreover, if a company was not so worried about future shortfalls, they could sell their excess credits to other companies that needed them.

But even then, subtle shifts were underway. Oil prices had crashed in 2014, and American consumers were rediscovering their love of SUVs and pick-up trucks. Because trucks are less efficient than cars and generally more costly to improve, compliance levels started to drop. Then, in 2015, incentives that gave extra compliance credits to flex-fuel vehicles (FFV) expired. These credits were essentially free, and automakers had overwhelmingly used them to compensate for inefficient trucks. By 2016, the industry as a whole had become a net consumer of credits, cannibalizing banked credits from prior years in order to comply.

Yet, while EPA and other observers now talk about these developments as indicative of a problem, the credit system was arguably working exactly as intended. Credits provide flexibility, reduce compliance costs, and were intended to allow the industry to deal with shocks like the plunge in gasoline prices and ensuing shift to SUVs that began in 2014. Credits traded between manufacturers are an especially efficient outcome because it means marginal emissions reductions are coming at the lowest cost.

So why is this being framed as a problem? 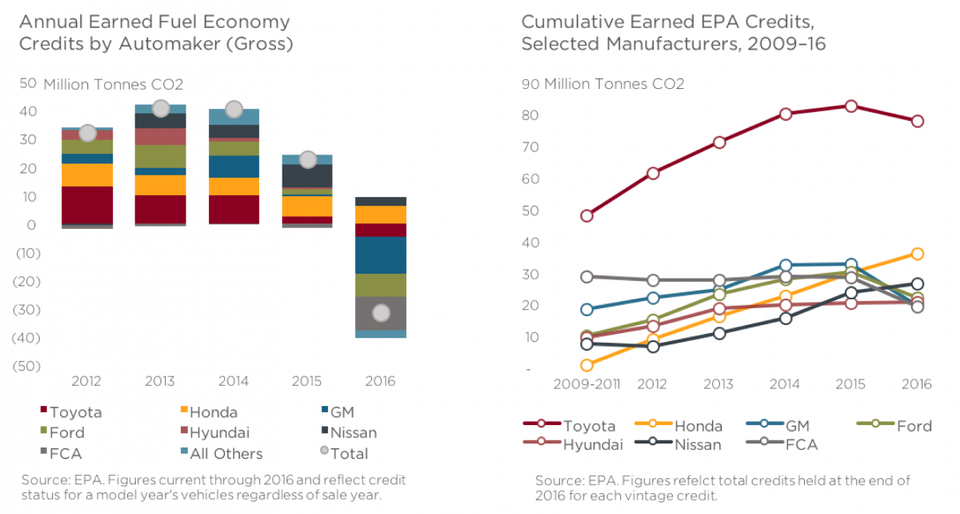 A look at fuel economy credits over time.

On the former point, the big three U.S. auto companies were the industry’s major credit consumers in 2016, with GM, Ford, and Chrysler accounting for 75 percent of the total. Moreover, some of the big three will soon likely be out of banked credits. After consuming 13 million tonnes of credits in 2016, GM, for instance, had only 19 million left entering 2017. Chrysler and Ford are in similar situations. These companies were all likely consumers of credits again in 2017, though EPA has not yet publicly released that data.

In large part, these companies’ predicament is a function of the number of trucks they sell. Pickups and SUVs have accounted for a whopping 80 percent of the new vehicles sold by Ford and GM this year.

In large part, these companies’ predicament is a function of the number of trucks they sell. Pickups and SUVs have accounted for a whopping 80 percent of the new vehicles sold by Ford and GM this year. For Chrysler, the total is closer to 90 percent. All three of these companies generated massive compliance shortfalls in their 2016 truck fleets that needed to be filled with credits. Companies that sell fewer trucks, like Honda and Nissan, instead continued to generate excess credits.

In theory, this dynamic should create the perfect conditions for trading among automakers to begin to sprout up in a major way. Rather than seek expensive emissions reductions in their truck fleets, automakers with deficits could seek out more efficient firms and buy their credits to comply. But to date, these markets have been held back by two major factors. First, companies were able to rely on their own banked credits, other incentives and generally lenient standards. Second, there is no real platform for trades or transparent price discovery. Trades occur on a one-to-one basis, and the transaction details are kept secret. As a result, trading has been relatively moribund, equal to less than 1 percent of available credits in model year 2016.

What little we do know about prices is very interesting. Using Tesla’s 10-K reports and sales volumes from EPA, I find that credits traded for $35 per tonne in 2016, arguably the least distorted year to date due to the absence of FFV credits. (For prior year estimates, check out this outstanding paper.) Note that prior to the Trump Administration, the federal government’s estimate of the social cost of emitting a tonne of carbon dioxide was roughly $40 per tonne. So, for the most recent year, we have data, transaction prices indicate a coherence with the intended goal of this program: reducing emissions to address climate change.

Critically, however, things get a lot more complicated after 2021, which brings us back to the unique dynamics of the EPA rule and this week’s determination.

In order to make the rules binding, EPA stipulated that credits banked during the early years of the program from 2012 to 2016 could only be carried forward through 2021. This means that the supply of credits is likely to get substantially tighter beginning in 2022. One possible offsetting factor will be the generous compliance treatment of electric vehicles, which begins 2017. But this bonus program also expires in 2021, and credits generated during this period can only be carried forward five years.

There has been no discussion of attempting to tweak the credit trading system to make it more transparent and functional, which is hugely unfortunate.

In other words, for an automaker with a large truck fleet looking at compliance post-2021, your two most likely strategies will either be to make expensive investments in improving the efficiency of your trucks, or plan to rely on an increasingly tight—but also opaque—credit market. Given these choices, the auto industry collectively chose option C: fight to weaken the 2022-2025 standards. And EPA appears primed to go along.

To my knowledge, there has been no discussion of attempting to tweak the credit trading system to make it more transparent and functional, which is hugely unfortunate. A well-functioning market for GHG credits would likely reduce industry’s compliance costs considerably in the later years of the program while also achieving substantial GHG reductions to address climate change. This win-win opportunity deserves far greater attention than it is getting.