November 27, 2014 ushered in a new era in the global crude oil market. Faced with global oversupply and falling prices, Saudi Arabia ignored precedent—and the calls of the poorer member nations of OPEC—and blocked efforts to coordinate production cuts. Leaving the price of oil to the whims of market forces has meant much turmoil and pain for OPEC nations over the past year, but there is no indication that the Saudi decision-making calculus will change this week as the group meets again in Vienna.

There’s no doubt that for Saudi Arabia, the costs of its actions have been high, likely higher than expected a year ago. The fiscal damage to date has been remarkable, as the Kingdom’s foreign reserves have declined by $90 billion since last year; while it still holds over $600 billion in reserves the hit has prompted unprecedented moves by Riyadh to raise debt. After initial forays into selling bonds domestically for the first time since 2007, Saudi officials said this month that they plan to raise financing from international bond markets for the first time ever. While details are set to be finalized in January, reports indicate debt levels could rise to as much as half of GDP within five years, up from an estimated 6.7 percent in 2015.

That Saudi Arabia is tapping debt markets isn’t wholly unexpected, as Oil Minister Ali al-Naimi said as far back as last December that deficits were likely to prompt Riyadh to borrow in the short term. It is, however, unlikely that Saudi officials were expecting such drastic and protracted fiscal consequences. The IMF has projected that Saudi Arabia will go from a current account surplus of 10.3 percent of GDP last year to a 3.5 percent deficit this year, deepening to 4.7 percent in 2016.

Of course, Saudi Arabia is relatively well insulated by the size of its coffers when compared to other oil exporters. The IMF has estimated that oil exporting nations in the Middle East and North Africa as a whole will see their current account balances drop from a collective 8.9 percent of GDP surplus last year to a 4.3 percent of GDP deficit in 2016. The near future is especially drastic for Algeria, which is facing a 2015 deficit of 17.7 percent of GDP, and Iraq, experiencing a 12.7 percent deficit.

The IMF has estimated that oil exporting nations in the Middle East and North Africa as a whole will see their current account balances drop from a collective 8.9 percent of GDP surplus last year to a 4.3 percent of GDP deficit in 2016.

Despite the economic consequences of its production strategy, Saudi Arabia cannot be expected to change course now. In the past week, oil ministers of both Iran and Venezuela have expressed belief in the need to change OPEC strategy but skepticism that Saudi Arabia will agree to cuts. With the apparent goal of last November’s decision being to sideline non-OPEC production—most notably U.S. shale—and regain market share, it would seem the Saudi-led goals are beginning to be accomplished, whatever the cost. U.S. production has just now begun to retreat due to the low-price environment; after peaking in April at 9.6 mbd, production has slowly fallen to 9.1 mbd, and according to initial October figures in the EIA’s Monthly Energy Review released this week, the U.S. has finally seen a marginal production drop in year-over-year terms. 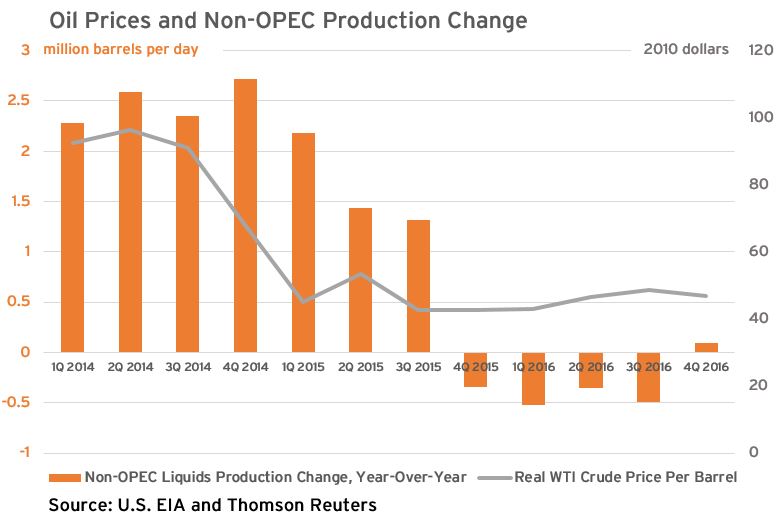 That said, the slow pace of production decline coupled with slack demand growth means that a rebalancing of supply and demand is likely to take a long time. EIA administrator Adam Sieminski, for example, suggested at the CSIS Global Security Forum last week that a return to balance and a sustained oil price rebound will not come until the end of 2016, and so while the effort to defend market share is finally biting, Saudi Arabia—and, whether they like it or not, other oil exporters—will have to deal with the financial and political effects of decreased oil revenue for the foreseeable future. Questions of cutting supply in a coordinated manner once this rebalancing occurs—and as returning supply from Iran and Iraq force the issue—will no doubt be prime issues for OPEC to grapple with in future meetings.